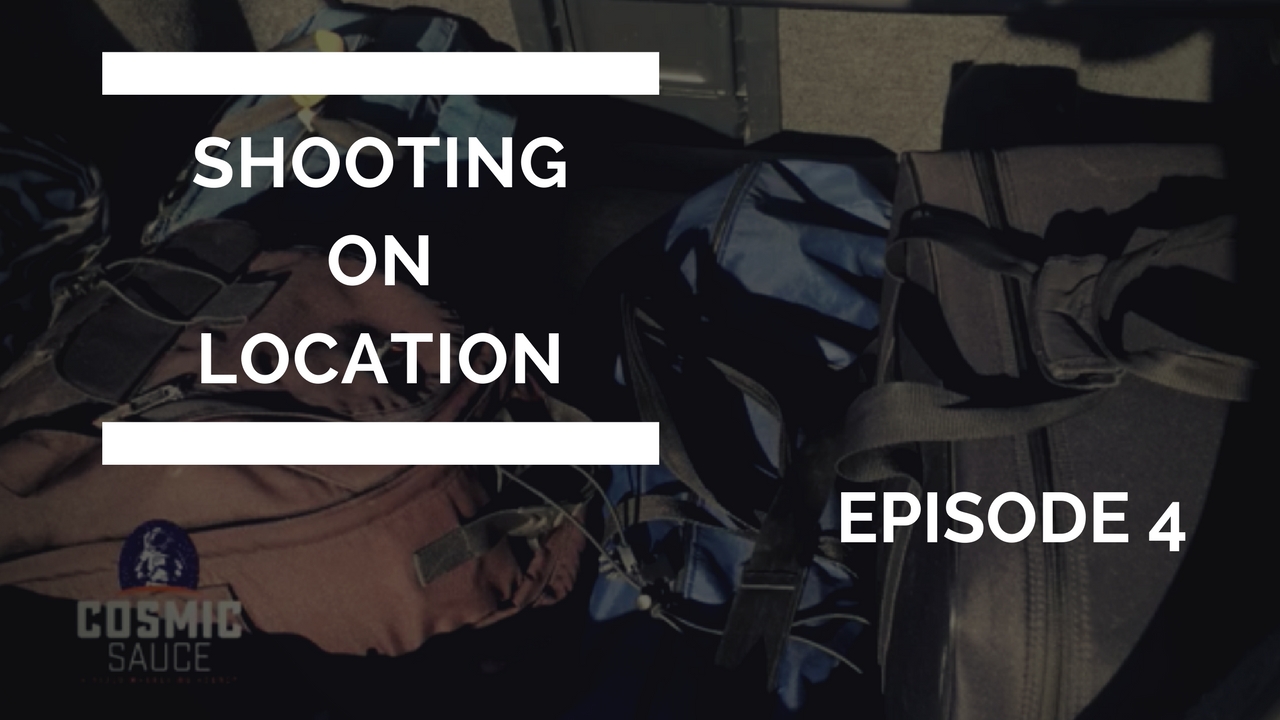 This week, Johnny Eaker is on location in Chicago where he shows you how to get the best interview with minimal equipment, the gear he never leaves home without, and how important shooting in LOG is for your final video.

I am in Chicago this week on an assignment for a client, so I’m back up the road a little bit. I thought I would bring a good topic this week. Last week I talked about picking locations, well what do you do when you’re not 100 percent familiar? When there’s no opportunity to go scout? You’re going to show up and you’re just going to figure it out. In an added twist, I usually have a small crew that’s with us on assignment. For this one, it’s just me, so it’s kind of going back to basics. Before I get into that, I want to go over what do you do when you’ve got a small crew, what do you do when you’re on location filming, you’ve got to get some interviews, you’ve got to tell your story, but you don’t really know what to expect. How do you prepare for that? So right now, we’re improvising and using my hotel room. Tomorrow morning we have one hour to shoot five interviews in my room, and we’re going to break down how I prepare for that and what I’m doing. I only have two lights; and I’ll show you the gear that I brought for this week. I packed it in three bags and it fit in the back of my car. After that, I’ll talk a little about LOG and why that’s important. So, that’s what we’re going to do in this week of Video Marketing Insights. Let’s get started.

So let’s get into what I had in the back of my car whenever I left Columbia. That is my gear bag, the blue bag is my auxiliary bag, and the long blue bag is where I’ve got a travel tripod and some other things. Just three bags and then the black case is a drone case. We’re incredibly too close to an airport, so that’s another issue to talk about: when you can fly drones and when you can’t. The goal for tomorrow morning is to shoot five interviews. I’ve got basically fifteen minutes with each person, so we’re going to go really fast. The key to this setup is, keep in mind, I didn’t bring a truckload full of things and we don’t have this huge conference center where I can set something up and craft something; and this is a busy hotel, so I knew audio was going to be a concern.

One of the best tips I can give to anyone out there if you’re setting up a video shoot is if you’ve got cramped office space, A: borrow somebody’s house, or, B: rent a nice little hotel room, and rent a suite. We were lucky, we walked in and this is a beautiful hotel they’ve put us in, so we can definitely do interviews here. I’ve done interviews in some that are not as nice as this, so it’s very open and I’ve got a light here. The other light that I’ve got, I’m actually using it to light me right now. The cool thing about this is it’s a cool little travel light, and kind of hard to see but I’ve got this clamp that I always take with me, and I’ll leave in the show notes. What’s cool about this is it can clamp to anything. There’s different corners of walls so I can put this anywhere I want, and everything is battery powered. I do that on purpose, and what happens is I’m able to build a set in here using just two lights, so that’s what I did. So what I’m trying to do is give the background some light. In the morning the plan is to not let very much light come in. We don’t want people to see into my bedroom, so I intentionally left on the lights that were in the bedroom because then it lights up these doors a little bit.

I always travel with this full pop out reflector. I’m using the white side, and I’m going to put this on the stand. Then this is my interview chair. Camera will be over here, right? And then interviews going to go down, but back here, my little clamp is set and we’re using this chair to cover what’s going on. I don’t know if you can see, but there’s a chair at the desk, I intentionally placed that right there so that you can’t see what’s going on. So here is what the actual set looks like. Here’s that light kicking off the door to light me, so the bounce off the door is what was lighting me before the battery died. Then this is setting that lights back there in the very back, that when it was on I did a quick little shot right there. And then you’re able to see what’s going on there. So basically we’re bouncing our key light in this little LCD light, we’re bouncing it into a bounce card in this case, it’s a white reflector back in the back, that’s where I put my little travel light and you can see what’s going on.

So here’s our chair setup. It’s two lights and we’ve got our key. I’m not using a hair light. When we get started in the morning we will turn off lamps. I’m trying to control the light. Right now I’m trying to get as much light as I can because I don’t have enough lights to show you the background and light me, so we’re improvising. So, this is kind of what it’s going to look like. The key is if I come back I’ll try to flip back and forth. I’ve got to do back to back interviews so I’m trying to create something where all I have to do is shift the camera, shift the light, shift the interview chair, and I’ve got two very different looks all at the same time. I can do a five-minute change, so that’s really important. You can’t see it- there’s tape on the floor, as far as where things need to be so when I do a couple interviews we’re going to change. The last one I’ll change back so each one looks a little different, and each are on different sides of the frame.

Let’s look at example two. I’m turning the room just a little bit. Now, granted, we’re doing an hour and a half, two hours worth of work ahead of time, but this is so the day of the shoot goes by fast. We’re going one and then we’re going two. So that’s a quick graded example of what’s happening after that. That’s a quick little setup on an interview, and the reason why we’re using this hotel room is because I have no idea what we’re walking into. We were walking around downtown Chicago and it’s crazy loud, so I can’t stress enough how important audio is to your shoots. I don’t have a professional audio engineer with me because I’ve done shoots, but if you’ve got a skilled person that can listen and say, yes, this is fine and know what they can do in and out of post, well, then you can do it, but I know audio is not my super strong skillset, so I need to stay within those boundaries. I want to control audio as much as I can, so I will not shoot in the hotel lobby. It’s too crazy, it’s too busy, it’s way too noisy, especially in the morning. We have to do these interviews between seven and eight fifteen tomorrow, so you know breakfast is going on, things are going to be crazy, so you just have to roll with it. Another thing you can do is look for an empty conference room. You can look for hallways that aren’t that busy, outside if that’s an option. This is an airport hotel, so not an option. Planes are loud and the minute you start rolling, those planes will roll. They’ll be quiet for an hour and a half and the minute you roll, that’s what’s going to happen, so in here you can control the environment. The only thing that’s going to change in the morning is there might be some daylight trying to peek through those back curtains, so color temperature wise I’m going to have to control some things.

What I really want you to understand is that you can get a lot done without having a ton of equipment. I had three bags coming up here, and granted, I jammed those bags full of stuff, but I was able to get a couple of stands, all of this fit in the trunk of my car. I want to create some soft diffused light, and the reason why we do it this way and we don’t point the light right at me is the same reason as if you’ve got a flash on your point and shoot camera. You turn that on and it just pops, and it looks like a party pic, right? Which is fine, but we’re trying to craft an image here. I’m trying to get some contrast, I’m trying to get what’s called a ratio, and a ratio is contrast between the light and the dark part of my face. It’s not all just bright, it’s not all dark. There’s a ratio between the light and the dark parts of my face which gives a pleasing image. In the background back there, that’s where we see the travel light, and what that’s doing is lighting that up, and I don’t have any other lights on in here other besides the two lights I have set up.

It’s so important to do proper pre-production before you even roll anything on the camera. The last thing I’ll touch on is LOG because when I was exporting images the images you saw earlier, they actually looked like that. That is an LOG image, that is how professional cinema cameras record, so you’ll see that it’s a very washed out, a very gray black, a lot of contrast, and that’s the before. What it becomes, and that was a quick color grade, and color grading is the process of applying a look to an image. It’s above just correcting the image, it’s dialing in on what you want it to look like. LOG is important because it gives you the ability to create what you want in a post without damaging the image, to a point. It’s very similar to photography when you shoot a raw image in photography. You can shoot raw on video, but for most of what people are doing for business and marketing, you don’t need to, and LOG gives you a nice amount of what’s called dynamic range. It just gives you more latitude to do what you want to do in post.

The idea here is to show a little bit of what we know about creating great marketing videos, and helping you take your business to another level. With that, you guys have a good night and I’ll see you back in Columbia next week. Thanks.